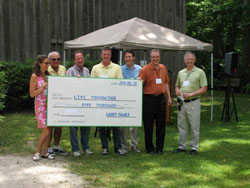 June 20, 2010 was the Official Opening of the unique Carey Carolinian Arboretum and Trail. As a result of a very generous donation valued over $26,000 from Lewis Stafford Carey MD in 2008, a new Carolinian arboretum and trail is growing at Longwoods Road Conservation Area, just west of London in the Municipality of Strathroy-Caradoc. On June 20, 2010, the Lower Thames Valley Conservation Authority and the Lower Thames Valley Conservation Foundation recognized and celebrated with the Carey Family, all project partners and donors. Approximately 70 guests attended the event. In addition, the Carey Family presented a $5,000 cheque from the estate of their father at the official opening followed by the official ribbon cutting. 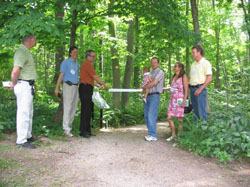 The late Dr. Lewis Carey presented his vision of a Carolinian arboretum to the Lower Thames Valley Conservation Authority and Lower Thames Valley Conservation Foundation in 2006. He was inspired by a book on Carolinian forests upon his return to London, Ontario in the early 70s. Dr. Carey was aware of our areas First Nations pre-history and how it was being depicted at the Ska-Nah-Doht Village and Museum at Longwoods. This prompted him to support a project to emphasize the connection between the precious Carolinian forest habitat and the local people.

The Carolinian Life Zone, is a region rich in rare and unusual plant and animal species found nowhere else in Canada. Longwoods is located within this region. The Carey Carolinian Trail and Arboretum will increase environmental awareness about Carolinian species and serve as an ecological classroom. It will be a living botanical museum of Carolinian ecology for today, as well as a lasting legacy for present and future generations. These trees and plants will be important seed producers for years to come.

With London expanding towards Longwoods, Dr. Carey felt that the Carolinian arboretum and trail project would have a good audience of adults and children visiting the property and present a huge marketing opportunity for the conservation area. Longwoods would be the nearby resource to come to see and learn about Carolinian trees. He also felt that in time, a Carolinian arboretum could provide valuable seeds for study and propagation at local universities and colleges. In Dr. Careys words, … the whole point is to have a winding trail in a Carolinian forest with plants and trees planted over time, and (it) could have various secure bird houses in areas…students can see all the birds and animals. Trails will have special surfacing for good drainage to allow optimum accessibility. The trees would be of various sizes, some small and some a good size with arboretum signage identifying the Carolinian species and their attributes. The arboretum shouldnt be so big that kids cant manage it. In addition, Dr. Carey donated a significant supply of timber beams for the construction of an information kiosk in the later project phases to highlight Carolinian trail and arboretum brochures and postcards. Fund-raising for this phase is still ongoing.

Taking his wishes into consideration, the Carey Carolinian Trail and Arboretum is now growing. An existing trail system at Longwoods has been modified with a new extension blazed, and resurfacing has created a beautiful, winding, wheelchair accessible trail. Nesting boxes for Carolinian birds and mammals have been placed along the trail. Nearby, an open area beside our 3 heritage log cabins showcases flowering tree species. Arboretum signs accompany 42 species of Carolinian trees and shrubs, providing the scientific names of the species, unique features, and their historical and present day importance to the residents of the Thames River watershed.

The Carolinian species of mature trees, large stock trees and seedlings which are growing along the trail system and plaqued are:

Partnering organizations assisting with this project so far include:

Private donors supporting this project so far include: